January 17, 2019
The project has reached an operational stage with the following milestones.


The Smart Home is controlled by Openhab2 using a Raspberry PI. After some initial instability, the system finally is able to be functioned smoothly. The main control panel is Habpanel and a sample of the main dashboard is as shown. 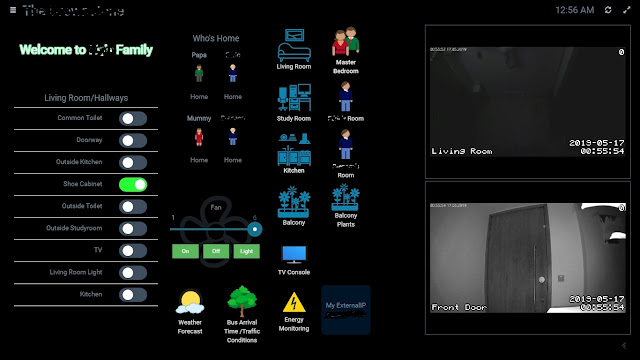 Habpanel is one of the official UI supported by Openhab. It comes with some pre-defined widgets such as buttons, frames etc. For the pictures above, some of the widgets are custom widgets created by third parties such as the column of sliding switches, presence detection panel and the fan control panel. User can easily extend habpanel widgets because the widgets are written in AngularJS.

There are 5 main types of communications protocols:

1. WIFI
This is the main backbone used by all the devices.
2. Zigbee
This is mainly used by Xiaomi sensors.
3. RF 433 MHz
This is used by the ceiling fans, doorbell and remote switch.
4. Infrared Red
This is mainly used by Air Conditioning control.
5. Bluetooth Low Energy (BLE)
This is used by Xiaomi plant care, switch bot and Xiaomi temperature sensor.

MQTT is the main communication protocol used for the switches. I am using Xiaomi sensors such as temperature/humidity, PIR motion sensor and Door Switch (to detect door opening).

The following are the home appliances which integrated with Openhab2.

The details on how to set up can be found at Openhab forum. For the future phase of the project, I will plan to have my personal myopenhab server that connects to my Google Home assistant.

This is the main portion of the Home Automation controls. All the light switches are controlled using Openhab2. There are 1,2 and 3 gang switches and all the switches are flashed with Tasmota firmware.

The Sonoff RF bridge can decode the signals for the RF fan. The RF ceiling fans are controller via the Sonoff RF 433 bridge.

Panasonic TV control is one of the bindings provided by Openhab. The binding is unable to turn-on the TV so I have using WOL (wake-on-lan).

The binding officially did not support this control. For all the IR key,  I will need to manually learn the IR command. This is not very efficient and unstable. I have changed this to use Aqara aircon companion. This is still not supported by Openhab binding. I have downloaded the source code from rytilahti python-miio.

The official binding can support this device. Besides turning on/off, I can obtain the purifier's temperature, humidity and PMI sensors values.

This is plant care from Xiaomi which can measure soil moisture, fertility, ambience light and temperature. I have written a blog post comparing the International and Chinese version. This sensor communicates via bluetooth and I installed on a small Raspberry PI zero this software to obtain the sensor data to send via MQTT.

This gateway is used to control all the Xiaomi sensors and switches that work on Zigbee protocol. Openhab has native support for this