December 17, 2017
UDOO Quad is a maker SBC board from UDOO. It has a built-in Arduino microcontroller and can run Linux on the SBC. On the web, most of the Google IoT Core samples have been focused using Mongoose OS and I have written a post on "Journey into Google Cloud IoT Core with ESP8266 and Mongoose OS". Recently, Google releases code samples which make the initial handshaking with Cloud IoTCore simpler.  For UDOO, the tedious part is to get all supporting tools to work with a particular version of Linux Distribution.

UDOO supports a few Linux distributions (Ubuntu, Debian and others). I have installed Ubuntu and the current version supported by UDOO is 14.04 LTS. For this demo, I wanted to work on Python 3.5 and I have compiled the Python from source. This is step may not be necessary if you use the version that is installed (Python 3.4).

The idea for this project is to read the temperature and humidity reading from UDOO Arduino side, transfer the data to Linux side and forward the data to Google IoTCore. The data is streaming into BigQuery and finally displayed on Google Data Studio. The following are the stages:

There are a couple of steps involved in this setup. Firstly for the IoTCore, setting up Google IotCore by following the instructions. IoTCore will create 2 Pub/Sub topics, one for Telemetry Data and the other for State.

Next, create a Big Query dataset IoTDemo01 and within the dataset, create a table weather. The schema for the table is as shown. For the Big Query schema, normally I will create the column attributes as String. The reason is to prevent failure when inserting and this can be cleanup later or transform using the Big Query SQL. 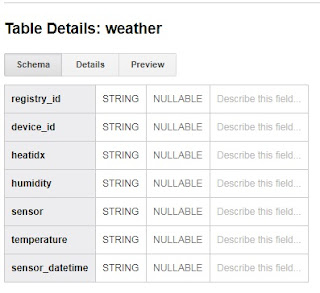 The source code for the above is available at GitHub. It also contains a simple Arduino sketch t read data from DHT11.

To execute the code at the shell, the following command is used. Replace the data in the [] with your project id and registry id.

Finally, after making sure that the data are correctly inserting into Big Query, the final stage is to display the data on a Dashboard. Google Data Studio is a very powerful tool which has a connector that can directly connect to Big Query. 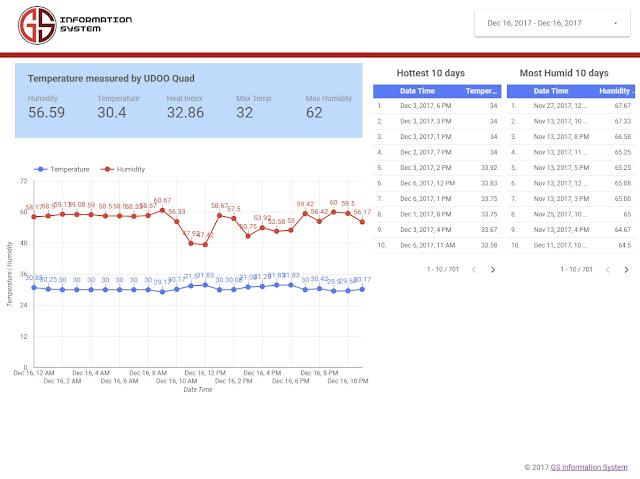 Here is the live link which shows hourly average temperature and humidity.