November 05, 2017
I have written about using App Scripts to collect telemetry data and the ease of integrating it to Google Sheet to chart the temperature and humidity reading. In this post, I shall describe the approach using a CSV uploaded via Google File Stream and a scheduled job which is written in App Script to load the data into Big Query. This approach is very good for integrating the transactional capability of ERP system and the Analytics capability of Visualisation system (Data Studio).

ERP system has rich built-in business process workflow and transactional control, When performing Dashboard and Data Analytics functionality, it will slow down the entire system. In this case, it may be better for analytics features to be performed by another system. Fortunately, most ERP system is capable of auto execute a query to export CSV data. I have made use of this capability to import the daily files generated by ERP to Big Query via Google Drive. This CSV file is picked up by an App Script to import the file to Big Query.

There are a couple of setups that are needed before the App Script is able to link up with Google Cloud Platform services.

1. Linkage to Google Cloud Platform. A new GCP project will be associated with the App Script project. I was trying to associate with an existing project but it does not recognise the existing project. 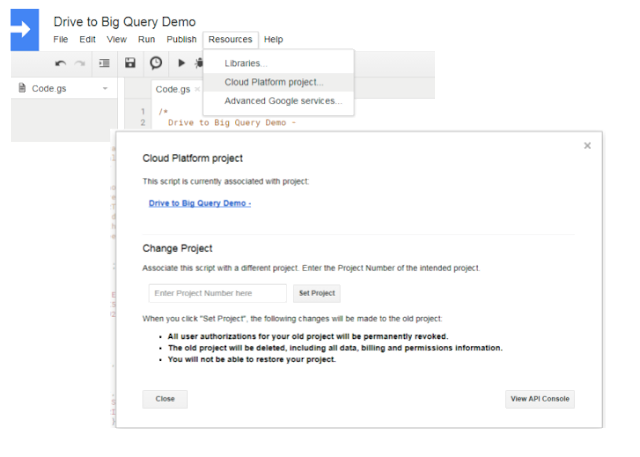 2. Enable Cloud APIs .There are 2 APIs to be enabled (Google Drive and BigQuery API). This has to be enabled at GCP and GAS. (This is a 2 steps process which I hope Google can simplify) 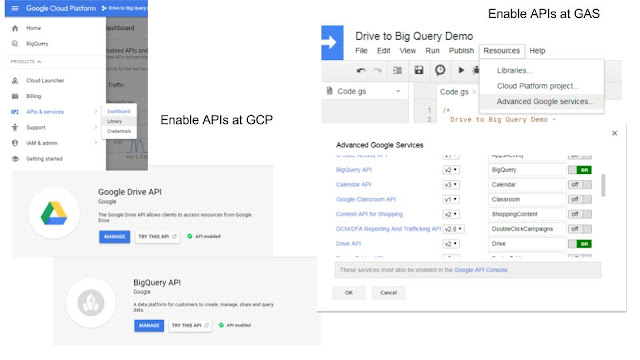 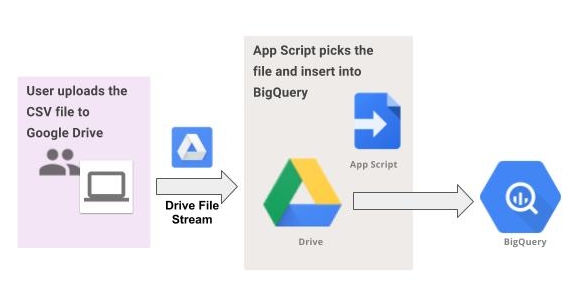 I am using GSuite so Drive File Stream works for me. This utility program automatically syncs the CSV file from my computer to Google Drive. At Google Drive, I have written an App Script that periodically monitors the folder for the existence of a certain file e.g. sample_yyyymmdd.csv. When the file(s) are found, the scripts will automatically import the file into Big Query. I have created 2 folders in Drive, "error" and "done". When the file is successfully imported in Big Query, the script will move the file to "done" folder or otherwise.

Big Query is very efficient in read operations but insert operations, update and delete of a record is very inefficient. In fact, Google has imposed quota on these operations. To get around this, when importing, I have created 1 table per file. This technique has another advantage whereby if the data for a particular day is incorrect, I only need to need to drop the table for that day and re-import the corrected data.

The App Script code can be found here.